Ismail Maskromo Presented a Poster Presentation in The Plant and Animal Genome (PAG) Asia 2013 at Singapore: The ABSTRACT 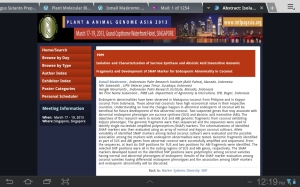 As part of his PhD program at Plant Breeding and Biotechnology Study Program, Department of Agronomy and Horticulture, Faculty of Agriculture, IPB, Bogor, indonesia, Ismail Maskromo has participated in the Plant and Animal Genome (PAG) Asia 2013 Symposium in Singapore, March 17-19, 2013. The following is the abstract of his poster presentation in that PAG 2013 Symposium.

Poster No. 99 (P.99). Isolation and Characterization of Sucrose Synthase and Abscisic Acid Insensitive Genomic Fragments and Development of SNAP Marker for Endosperm Abnormality in Coconut.

Endosperm abnormalities have been observed in Makapuno coconut from Philipine and in Kopyor coconut from Indonesia. These abnormal coconuts have high economical value in their respective countries. Understanding on how the changes happen in abnormal endosperm of coconut will be beneficial for future development of this abnormal coconut. Two suspected genes that may associate with abnormal endosperm phenotype are sucrose synthase (SUS) and abscisic acid insensitive (ABi). The objectives of this research were to isolate SUS and ABI genomic fragments from coconut exhibiting Kopyor phenotype. The genomic fragments were then sequenced and the sequences were used to identify single nucleotide amplified polymorphism (SNAP) markers. The informativeness of identified SNAP markers was then evaluated using an array of normal and Kopyor coconut cultivars. Allele variability of identified SNAP markers among tested coconut cultivars were evaluated and the possible association among the markers with endosperm abnormalities were tested. Genomic fragments identified as part of SUS and ABi genes from abnormal coconut were successfully amplified and sequenced. From the sequences, at least six SNP positions for SUS and two positions for ABi fragments were identified. The selected SNP positions were all in the coding regions of SUS and ABi genes, respectively. The SNAP markers developed based on the identified SNP positions were polymorphic among coconut varieties having normal and abnormal phenotypes of endosperm. Results of the SNAP marker evaluation among coconut varieties having differential endosperm phenotypes and the association among SNAP markers and endosperm abnormality will be discussed.